When visiting Nikko, my friend recommended we take a side trip to see this cute little suspension bridge! I love a side trip and I really  love a cute little suspension bridge so I was completely on board. We looked up Takimibashi which was a little past an abandoned Western theme park we also wanted to explore, so we had a fabulous day planned out.

We got off the train at Kinugawa Koen station and had to walk about 15 minutes (along a main road with no sidewalks) to the bridge. We saw it from afar through the trees and it was the most picturesque thing-  at the beginning of the summer season and completely enveloped by shades of green. As we got nearer to the actually crossing the bridge we could see the stunning teal flowing water and large boulders along the riverbank. There weren’t many other people around, a couple small groups of 2 or 3 crossed the bridge while we were there but otherwise we didn’t see a soul!

We took some photos (of course) and we slowly took in the scenery and landscape aloft upon this river and surrounded by rolling mountains. The river was lined with dozens of buildings- hotel and apartment buildings. Lots of suite windows and luxury views to overlook the charming little river valley. Of course this was an amazing place for a quiet resort town. But as we stood enjoying the view, we realized every building we could see, on either side of the river was empty.

Literally every. single. building. was. ABANDONED.

Slowly- as if out of a horror movie-  I realized that the upscale facades were unkempt- covered in weather and inattention; all that was missing was the slow dramatic build in music to accompany my unsettling new awareness. But It didn’t make any sense. Why were all of these buildings set upon these picturesque perches deserted?? We were too embedded in the mountains for much Internet research to be done until we headed back into town, but we were SO CURIOUS. And although we never entered any of the buildings*, it was clear that several of them looked as if people walked out one day and just… never came back. Furniture was still in the lobbies, art pieces still adorned the walls and statues were placed along the halls, technology still placed at a reception desk. WHAT.

I didn’t take any pictures as we walked along this row of abandonment- mostly because it was so creepy and intriguing and disconcerting and serene and baffling. I was just too overwhelmed to stop and take any pictures- having not known we were going to land ourselves in the middle of a forsaken row of barren hotels, we just wanted to get to the nearest pocket of civilization!

We made it back to the Kinugawa Onsen Station – which seemed… bustling? There were several families and couples and tour guides and groups milling about. (A man was even putting on some type of trained monkey show in front of the station, which was cute, until we realized the monkey was tied to a leash and did not seem very enthused, then the experience became much less entertaining.) Somewhere else in the area there must be other resorts and hotels catering to the travelers willing to give Kinugawa a chance again. We were still staggering from our desolate walk back to normalcy, but this place… gave off a weird vibe. It felt like we were stuck in time, among the mountains, forever doomed to wax poetic about what this beautiful pocket of time and space could have been. All of this to say- we were REALLY thrilled when our train finally arrived.

Our plan from the bridge was to go to an abandoned Western theme park I had read about, but when we arrived it was far less accessible that we expected. It was not a “come in and wander” experience like we had been lead to believe. So, having had enough run-ins with abandoned places and truly not wanting to get ourselves into trouble or disrespect anyone’s property- we decided to cut our losses and start our trek back to Tokyo! 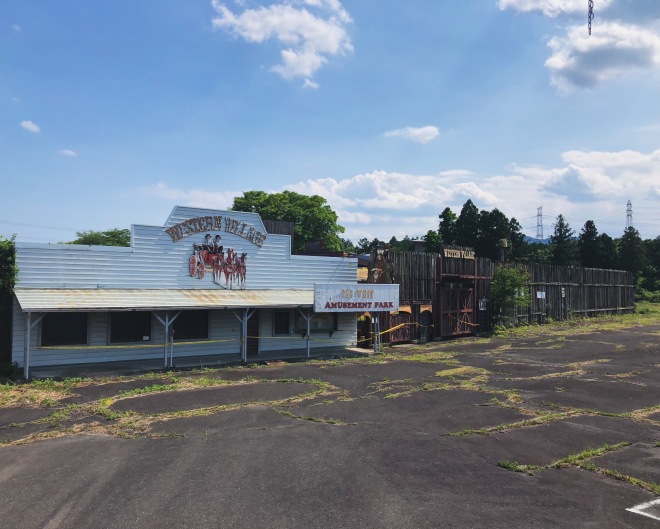 Upon doing some research, the story of Kinugawa Onsen is a simple one. The economy was booming in the 1980s, when the destination spot was built up for thousands of tourists and spa-seekers to visit. When the 1990s rolled around, the economy was not as in good of shape and although Kinugawa Onsen was lovely, a trip here was not a necessary expense and the hotels began to shut their doors until none were left. And there they still remain, mostly untouched, today.

*All we wanted to do was head into one of the creepy yet alluring abandoned hotels, but we remembered that we were guests in the country and shouldn’t be looking to get into places that we weren’t “supposed” to be. It is so important to respect the country you’re in and it’s laws- no matter how similar or different to the ones you are familiar with. And as amazing as it would have been to see it firsthand – neither of us wanted to jeopardize our time in the country or disrespect the rules set in place.