Hello, again! Amelia here, coming at you from Japan!

I moved here about 2 months ago (wow, time flies!) for a performing job and am scheduled to be here through March of 2018. My work schedule has been quite full which doesn’t leave a TON of time to explore, but I have done my best to try and plan my time so I can see as much of Japan as I can.

I have many posts-to-come about Tokyo and the wonderful neighborhoods and atmospheres of the city, but I wanted to make my first real post about my favorite day-trip (so far) to Kamakura.

Kamakura took me about an hour and 45 minutes to get in and about an hour and a half to get out- the train that took me “directly” to Kamakura Station dumped us out about 4 stops early and we had to wait for another train to arrive that completed the rest of the line.

I ventured out on a Saturday and exited Kamakura Station around 11 am to a LOT of tourists beginning their same day trip adventure. My initial plan of attack was shelved rather quickly as I was herded along with the crowd, but I was willing follow those who seemed a little more sure of where they were going. The crowd led me down a bustling street of souvenir shops and cute restaurants opening for lunch.

I walked down this street, eventually had to pull out GPS to orient myself and then continued onward. I had not intended to visit Tsurugaoka Hachimangu Shrine – a large shrine aloft upon a hill, overlooking a main street of Kamakura, Route 21, but after realizing it’s central location and grand presence in town, I couldn’t miss it! I did not approach from the main street, I was on a side street along the perimeter of the park, which allowed my entrance to the shrine to feel a little less touristy.

Of the shrines I have seen, this one was as fine as any other. It was crowded and not particularly dramatic in architecture or aesthetic- but there were a couple gardens full of  that were very pretty. AND I happened to stumble upon a wedding at the shrine amongst all the hubbub! 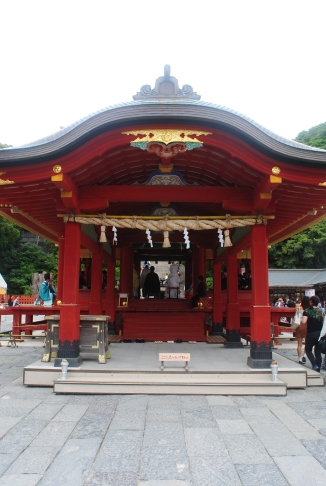 Location of the Wedding Ceremony 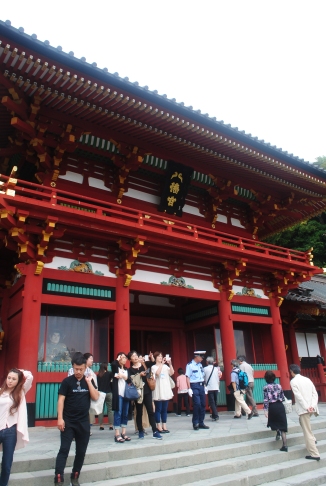 One of the gardens!

From here I decided to stave off my hunger by walking another half mile to the temple I was most excited about- Hokokuji! This temple is known for it’s beautiful bamboo forest- and as I had never been in a bamboo forest, I just HAD to go! (Not for nothing, this might have been the catalyst for this WHOLE trip.)

I trekked along a road that had a sidewalk for most of the way… but that almost seems to be a rarity here. Usually people walk along the wide shoulder of the road which is the implied sidewalk. This goes for smaller towns and larger cities like Tokyo- anything turn off the main thoroughfare is basically a glorified alleyway.

As I journeyed to Hokokuji, I happened upon a temple that had been on my “maybe” list: Sugimoto-dera. It was right there and was pretty devoid of tourists so I popped in for 200 yen to spend a few moments and was not disappointed! The protected aged stairway covered in moss was as beautiful as the travel guides say! Although, definitely wear good walking shoes as the paths are not the most even-footed.

Hokokuji was lovely – I was by myself and had other places I wanted to get to, but next time I go, I’m paying the extra few dollars to have a cup of green tea in the middle of the bamboo forest. I mean, it doesn’t get much more serene than that.

From Hokokuji I started making my trek towards the Diabutsu (Buddha) and Hase-dera Temple, but passed Hokaiji Temple on my way and just HAD to stop and take a peek. This templed is known for a special flower, White Lespedeza, that bloom there but their season was nearly over and while the temple was still beautiful, as all temples are, it wasn’t a necessary stop on any itinerary.

I walked down Route 21 to get a different view of Kamakura as I journeyed toward the Big Buddha and stopped in to a shop for lunch- fried bread full of chicken, cheese, & basil and a chocolate churro- that’s a well-rounded meal in my book!

After refueling I was much more enthusiastic to venture to the long-anticipated Diabutsu. The 3rd biggest bronze Buddha in Japan is housed in Kotoku-in Temple. I found the temple itself to be quite plain and devoid of personality, but the Buddha MORE than made up for it. I had seen pictures of it online and figured I’d snap a touristy picture and move along. I was 100% wrong. It was so impressive and truly felt powerful, in a peaceful way. It was humbling to stand in front of it and to see others sitting on the ground, praying to the impressive icon.

This particular Buddha was cast in 1252. Over 800 years ago. And for 20 yen you can stand inside of it – yes, stand INSIDE of it. It is a hollow cast whose base has been strengthened and updated in recent years to withstand earthquakes and high winds. Inside is just as stuffy, small, and rather unexciting as you might imagine, but worth the 18 cents to be able to say you’ve been inside of an 800 year old object- if only for a unique conversation starter.

Kotoku-in Temple is about an 8 minute from Hase-dera Temple, my final stop. But make sure you leave yourself time to wander through all the souvenir shops and small restaurants that adorn the streets between these two temples. I found unique adorable plush samurai swords for my two little cousins and some adorable Buddha socks (for myself).

I arrived at Hase-dera Temple at 4:40 pm- it closed at 5, BUT I was wonderfully lucky and they accepted visitors until 5 pm and didn’t kick you out until 5:30! I am so glad I was able to go in- the temple sits atop a hill and had a lovely view overlooking the city at sunset. The Kannon (Icon) Museum was closed by the time I arrived, which was unfortunate- I guess I’ll just have to go back! The other buildings and gardens on the grounds were beautiful and interesting and there was even a cave! Yes, a legitimate cave with various icons carved into the walls – at two points you have to bend over at a full 90 degree angle to access the rest of the caves. Definitely an unexpected highlight. 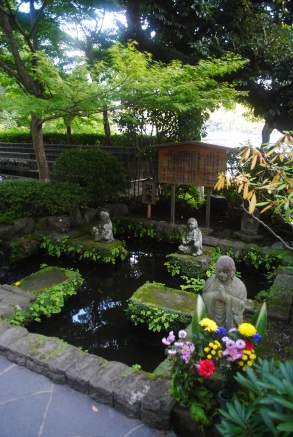 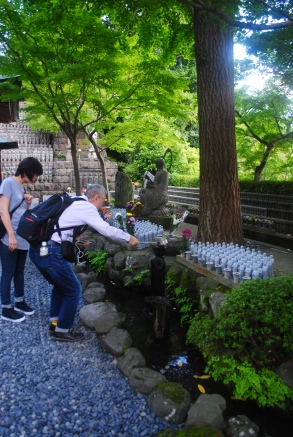 View from the Overlook of Hase-dera Temple 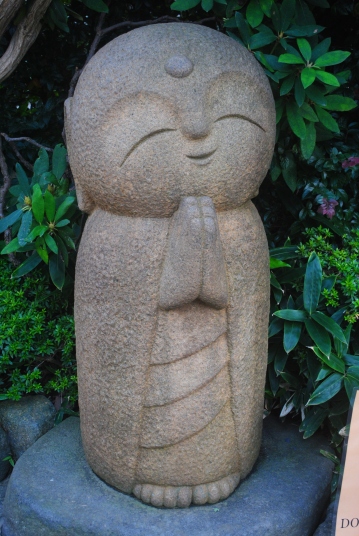 The cutest Buddha I have ever seen

But what I found to be the most pleasant surprise was the giant icon of Kannon inside the main temple. It is a wooden statue gilded in gold and stands probably 20 feet high (don’t quote me) and the power of the statue amongst the dimly lit hall made me stop in my tracks. It was truly impressive. Pictures are (rightly) not allowed inside the main halls of temples, so I don’t have a visual aid, but I’m not sure a picture could have conveyed it’s powerful essence anyway.

After I found myself in a small part of the gardens that had been roped off by an unsuspecting staff member in preparation of closing time, I realized it was time to go. I made my way to the Enoden Line to take a charming vintage-looking train back the short way to Kamakura Station.

A travel guide described this train as “Rickety”- it is most certainly not.

A stunning sunset over the rail station!

Kamakura Station is a hub of the town, surrounded by lots of businesses, restaurants, and shops. I stopped into a vintage clothing store and a pop-up used book store on my way out and left with fun movie programs of old movie musicals that were printed in Japanese! Fun souvenirs for me and my Golden-Age-musical-loving family.

Kamakura was a fantastic day trip and I look forward to returning with a friend or two in tow! Entry fees, train rides, and food set me back about $50 USD. A VERY doable day trip on a budget! Please check out @bedeliabounds on Instagram for pictures of my adventures from Kamakura and other jaunts around Tokyo.